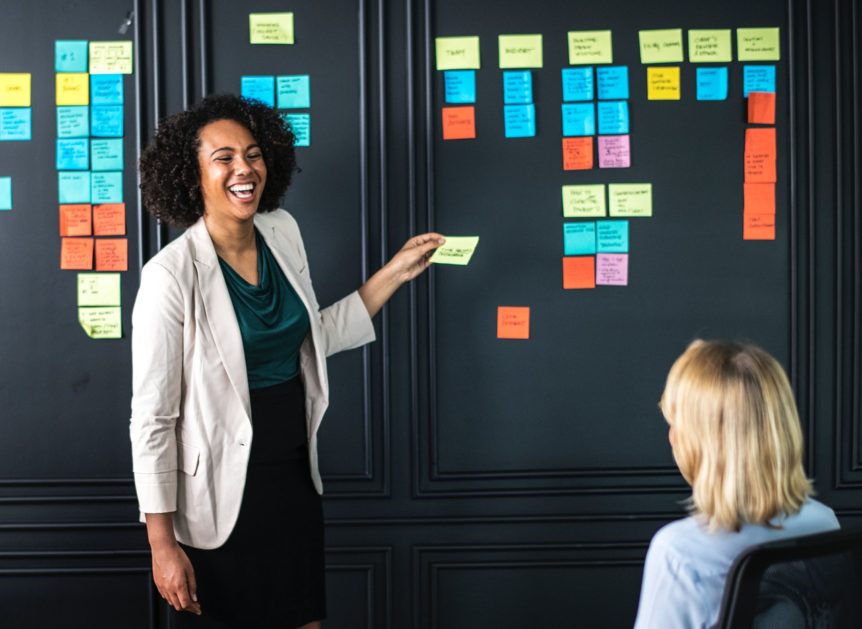 Women in the workplace face more challenges to attain leadership positions and to transmit their power effectively—body language and visual signposting can help.

It’s sad really, that there is an organisation called ‘The 30% Club’, aiming to increase women’s participation in the higher echelons of business leadership. It’s sad that in this day and age, a mere 30% is our goal, not yet achieved. It’s not called ‘The 50% Club’, or, even better, ‘The 51% Club’.

Women have been breaking through glass ceilings in increasing numbers, and things are slowly beginning to change, but women ascending the career ladder and taking up leadership positions still face gender-based challenges which years of social conditioning have engrained in society and corporate culture.

“Leaders are made, they are not born.” So said Vince Lombardi, the Green Bay Packers coach who led his team to victory in the first ever Super Bowl. And the second ever Super Bowl too, not to mention three NFL championships. His thoughts on leadership have become ubiquitous, and often confused—some might say leaders are born, not made. Well, just for the record, the full quote is:

“Leaders are made, they are not born. They are made by hard effort, which is the price which all of us must pay to achieve any goal that is worthwhile.”

There is much you can do to become a leader. And there is also much you can do to enhance your personal power, presence and gravitas to signpost to the world that you are, in fact, the boss, without throwing your weight around to prove it.

Your personal presence signposts you as a leader. Some people have an aura about them. They are relaxed in their own skin, and have a strong personal presence. There are many elements to this, from posture, to energy. Some are more easily controllable than others. We can all stand up straight and hold our heads up high—body language is a key indicator to other people.

One small example is, when speaking to a room, holding your chin up too high can come across as cold and patronising, while holding your chin low comes across as more approachable (think of the late Princess Diana’s signature tilted chin, transmitting vulnerability). However, a quite literally level-headed approach is best, and holding your head still, rather than bobbing it about, sends out a calm, authoritative vibe.

There are many other body language tricks and visual signposts which can be learned, (and crucially, rehearsed, rehearsed, and rehearsed some more), which can make a substantial difference to how you come across in every conversation, presentation or keynote speech.

From the orators of Ancient Rome, to the TED Talks viral stars of today, those who can use their words confidently and persuasively have always been feted. Public speaking is not a skill that comes naturally—let’s not forget we are not even born knowing how to speak. It is learned, and likewise, anyone can improve their speaking skills.

Those who make it seem effortless have usually put a lot of training and rehearsal in behind the scenes. Speaking to Business & Finance, Dr Anita Sands, a director on the boards of Symantec, ServiceNow and Pure Storage, revealed she credited a lifetime of public speaking training with helping her to hold her own when she stepped into corporate and boardroom situations where she was frequently the only woman.

“You should be investing in the core skills that you need, behind the scenes,” she asserts, “whether you’re a world-class athlete or a world-class executive. That’s the singular most valuable thing I ever did – it’s particularly valuable for women because one of the things that I’ve observed over the years is that women have a tendency not to speak up, so I tell young women all the time: ‘find your voice and find it early’. It’s not enough for us to have a seat at the table, it’s not enough for us to lean in, we have to lean in and speak up.”